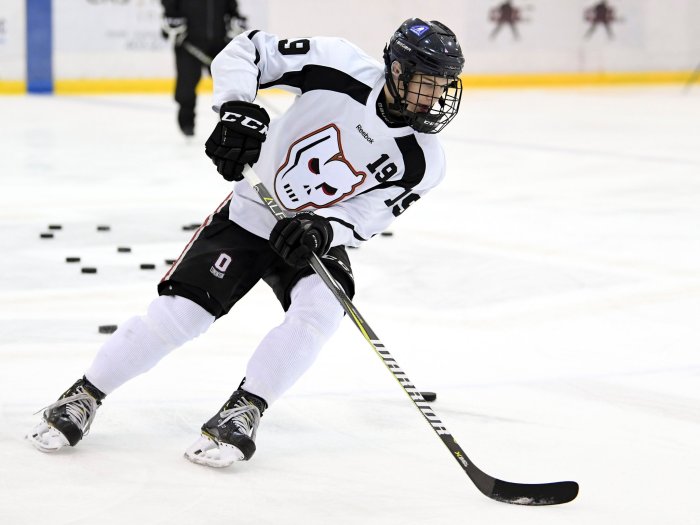 The Anaheim Ducks selected two forwards and one goalie with their late round picks.

Tschigerl is known for his gritty play and forechecking. He is not afraid to use his big frame(6’0″, 181 pounds) to put pressure on the puck handler forcing them to turn over the puck or dump it when on the attack. He can also be utilized on the penalty kill.

He does have good situational awareness and will go to an open area for a pass especially when a teammate is tied up by a defender. He is also aggressive in the neutral zone either pushing the puck up the ice when attacking or clogging up middle ice when opponents try to advance the puck.

He does need to work on creating scoring opportunities because sometimes he has difficulty getting past the defender between him and the net. He also tends to shoot the puck low and needs to work on elevating his shot when necessary.

He recorded 21 total points(13 goals + 8 assists) in 21 games with the Calgary Hitman last season. He led the team in goals scored.

Forecheck on the penalty kill. As soon as the defender motioned the puck towards him, he pushed the defender down, grabbed the loose puck and went top shelf.#2021NHLDraft pic.twitter.com/1wpbqqerhf

Alexander is massive at 6’7″ and 217 pounds, which makes him a solid choice in net. He does see the puck well allowing him to track it efficiently. He can cover the net laterally well and doesn’t leave much open room for skaters to shoot at.

Some experts didn’t have him ranked in this draft because he is viewed as a work in progress and a risky pick for a team. The concern with his play in net is his consistency, however he did play well last season in Winnipeg.

Kukkonen is a right handed center standing 5’10 and weighing 165 pounds.

He has great hands and skating speed. He likes to get to the open areas when he doesn’t have the puck and is dangerous at close range. He likes to shoot the puck instead of passing it. He plays attention to the flow of the game and is always involved in the play.

He was an offensive scoring machine with the Maple Grove Grimson last season. He had 74 total points(31 goals + 43 assists) in just 23 games. He was the captain and led the team to a 21-2-0 record.

The draw back to his game is his size and he could work on his acceleration. He will have time to work on things as he leaves high school and heads to Michigan Tech next season.

Kyle Kukkonen scores on a penalty shot for the Crimson with 7:06 left in the game, 7-4 Maple Grove pic.twitter.com/NBO6cI23xR

Ducks Select Zellweger In Round 2

Ducks Select Pastujov In Round 3

Ducks Select Lopina In Round 4

Listen to our podcast by clicking below or visit us at Podomatic, Rumble, Spreaker, or YouTube.

Support us by becoming a DucksNPucks patron! Members can win game tickets, Ducks gear, and more!

Want to start your sports media career? Then Join The Puck Network!

DucksNPucks is part of The Puck Network, which covers the entire NHL. There are openings to cover your favorite team(s) and earn school credits! If you are interested, then apply by filling out the form here: Join Our Team. What are you waiting for? Start your sports media career TODAY!

Check out our hockey gear!

Want to hear more Ducks talk? Listen to our podcast!